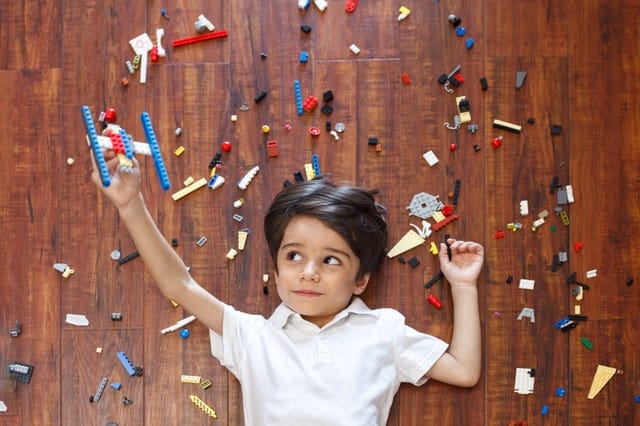 My children are getting older but I still struggle with getting the kids to clean up the messes that they make. I’m grateful for the times that they actually pull out some toys and play with them nicely. But there is still nothing that compels them to clean up after themselves.

The response I always get is “I’m not done playing yet” or “I’ll do it later”, as if their packed schedules don’t allow them the time to clean up.

I admit, there were many times I felt like it wasn’t worth the hassle to nag them to clean up and just did it myself. But by taking this route, I created 2 problems for myself:

1. I created the expectation that mom would clean up anyways because it was ‘mom’s job’

2. I became increasingly resentful and frustrated over time to not only see all of the clutter, but also have to spend hours picking everything up just to be able to vacuum the floor or clean the counters (check out Help! I Hate Cleaning on how to deal with this!)

So now I have completely changed my approach. I have made it known to the kids that:

1. I mean business and expect the kids to help clean

2. There will be consequences for not helping clean up the mess

So once we established the mindset that cleaning up was expected of everyone, I thought of the strategies that I would use to help try to make clean up as painless as possible.

Ways to Get Kids Cleaning Up

1. Use the ‘Exchange Your Toys’ System

Admittedly its not a hard and fast rule.  Its just the logical thinking I want them to have. Whether it’s a toy or a board game, if you are no longer playing with it, it goes back to where it belongs before something else is allowed to come out. No, it won’t always work and you will hear them say ‘how do I know I won’t play with it more after’ many times. But sometimes they will put it back before getting another one.

2. Make it Obvious Where Things Belong

Label the toy bins and have your designated boxes and baskets and shelves ready to receive flying incoming toys. Eventually it will become a routine and the kids will know exactly where everything belongs.

3. Give Them Some Control Over the Clutter

My kids are pack rats. They want to keep everything. I have to convince them to throw away some candy wrappers and tags off newly purchased items and clothing because they just want to keep them!

So instead of taking on that battle every time, I enforce the one box rule for things they can’t let go of.  Little toys and pieces of paper that they want to keep must fit in the one box. If it doesn’t, then they know its time for a cleanout.

Then of course there is the craft or artwork itself! Half the time this supposed masterpiece just has a smiley face and a few scribbles on it! This artwork really piles up fast!

4. Give Directions and Support Until it Becomes a Routine

I usually stand there with them and give them directions like what item goes in which bin. I’ll lend a hand so that they see we are cleaning up together but I make sure they are doing the majority of the toy clean up.

5. Make Visuals to Help Them

Telling kids to go clean their rooms can feel overwhelming for them. They will need guidance and a little support until it become routine. I have made and posted signs on how to clean their rooms and even how to place their dirty clothes in the hamper.

I think it helps that the signs clearly define what is required for them to do in order to have clean rooms. They love it because they feel like they have accomplished something when they make it through the list and it really works.

You can download signs for a low cost at our Etsy shop here.

6. Try Not to Let Toys Travel

Make sure kids understand that their games and toys are to stay in the play room or designated play area.  Once things travel from room to room, they are often forgotten and left there for mom to have to pick up later.

Although I do see the value in giving an allowance, I’m just not ready to go there yet. I guess I feel like these are small chores that are expected of them and everyone else in the family and so they shouldn’t be paid to do them. But perhaps we will reconsider it when they get older.

For now I usually encourage them to focus and clean quickly so we can have a treat or fit in an extra story at bedtime.

8. Remind Them that the School Rules are the Same

The reality is, tidying up is not new to our kids who are older than pre-school age! In fact my kids have been going to playgroups since they were infants. They know the tidy up song and what they are required to do and it’s the same at school. Why do they believe there are different rules at home?

If you are facing some resistance, its good to remind them that tidying up is an expectation in more places than just at home.

9. Add an Element of Fun

Even I feel like cleaning is much better after I put my headphones on! Music and little games like Red light, Green light! and Freeze are perfect for getting the kids cleaning and moving at a faster pace while having a little fun.

10. Explain Why Not Helping is a Poor Choice

Helping children understand the impact that their actions have on others is always important. For one, their lack of cooperation shows that they are not working together as a family. Plus there are other things you can communicate to them, such as risk of injury or breaking a toy after stepping on it or leaving little room for other activities.

Its also important to highlight that choosing not to clean up shows a lack of respect and that they are not responsible enough to be given more toys.

At what age should a child start cleaning up after themselves?

I recently watched my 2 year old nephew on Facetime take a book off of the shelf and then put it back before taking another one. My jaw dropped. Kudos to my sister for making it happen! I know I wasn’t able to accomplish that for the kids at that age. But the good news is its never too late.

Of course be realistic of what a child can do at an early age. He is a toddler, he still makes messes! But he already understands that cleaning is a part of playing.

What are some daily chores children can assist with?

I hardly even call this cleaning up. I call it putting everything back where you found it! When these items are lying around, it all just looks like clutter.  Things are less likely to pile up if kids can help with putting things back where they belong as part of their daily routine.

How do I get my kids involved in cleaning?

You will have to model the behavior in front of them first. Don’t start tidying up after they go to bed. Not only should you clean up in front of them, but also you should hand them some toys and direct them to the appropriate bin and ask them to help return them where they belong. This will eventually help them establish a routine.

How do you deal with a messy child?

There will need to be some rules established such as the toy exchange system discussed above where one toy has to be put back before another can be taken out.

Unfortunately, they will have to learn the hard way by losing the privilege of playing with and receiving more toys if they can’t follow this type of rule.

How do you deal with the “I didn’t make the mess, why should I clean it!” argument?

This is a very common argument in our household! The answer is family. Explain that we are working together as a family, not pointing fingers at who made the mess. We have a goal which is to tidy the room and it can only be accomplished by working together.