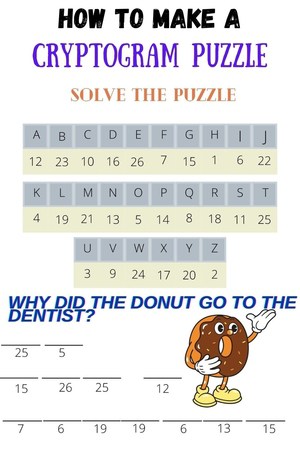 Most kids love solving puzzles. I recently introduced them to Cryptogram puzzles. Not only did they love solving them, but when I told them they could even make themselves, they went crazy making them.

What is a Cryptogram Puzzle

A cryptogram is a type of puzzle that consists of a short piece of encrypted text. Generally its the answer to a clue, a question or a joke that can only be answered by solving the ‘code’.

In its simplest form, the code is the letter of the alphabet that corresponds directly with its numerical position in the alphabet. So the letter A would be the number 1, all the way down to Z being number 26. The response can only be found by placing the letters on the numbered blanks.

Next choose something to write about. The kids love writing out jokes and letting others figure out the punch line by using the code instead of the traditional way of telling it.

Create blanks corresponding to the length of the words in the answer and number them according to the code.

Check out our cryptograms and other puzzles under free kids printables like the one below:

3 thoughts on “How to Make Cryptogram Puzzles for Kids”