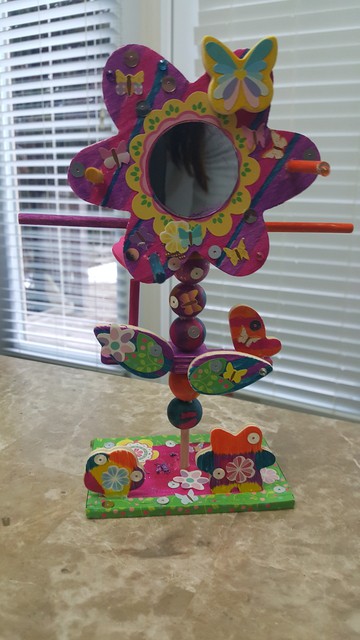 If you have a daughter that has a substantial jewelry collection and loves coloring and making crafts, then the Wood Worx jewelry stand kit is a gift to consider buying her.

My daughter received this jewelry stand for her birthday.  Have you ever received gifts for the kids when they were really young and thought, I’ll just pack this away for now?  Maybe I’ll bring it out when they are more independent or when they become interested in these kinds of things.  Or maybe when I’m having that kind of day when I don’t think I’m going to make it without losing my mind and need reinforcements like pulling out a new toy! Well, that’s what I used to do. Of course the kids are older so I would never be able to get away with that now!

I have an old chest where I used to store these crafts and toys that they would get on birthdays that I didn’t want them to open right away.  However, I did end up leaving one in there for almost 2 years! My daughter received it when she was 5 and I took it out after she turned 7, but I honestly think she enjoyed the process better at this age. Plus she had time to collect more jewelry!

My daughter is pretty much into anything that is pretty, sparkly, glittery, colorful – especially pink and purple…ok, I think you get the hint. Any maybe you can relate!  Also she has a ton of jewelry – thanks Grandma! Its often lying around and she has them in several different purses and boxes.  Since the holidays were approaching, I knew it would be the perfect time to work on this craft and also help organize her things.

Here is a picture of all that is included in the kit.

So one thing I have to say right off the bat is that the paint had dried out.  But since I had the kit hidden away for 2 years, I would have to say that’s on me! Yes, it was almost a disaster because the stores were closed when we opened this and she was so excited to get started.  What saved me was some design markers we had just received for her 7th birthday to color a water bottle.  Phew, the day was saved!

I have no doubt that she would have loved painting but she was satisfied with coloring instead. I can’t speak to the quality of the paint unfortunately but I have read other reviews and they were not unfavorable.  There is also a way to save craft acrylic paint if it is not completely dried out. You can read about it here.  Unfortunately ours was too far gone.

The kit also comes with a small glitter stick, glue, many stickers and sequins. I kind of wished the sequins were stick on because it did take some time to glue them, and I had to carefully wipe any excessive glue from around them. But it still worked just fine and looked really nice.

When she was done coloring all of the pieces, we glued them together and let it dry overnight. The instruction do say that ages 5-7 may need help from family. Gluing took some time and did require some fine motor skills to complete. I don’t think she would have been able to do it on her own, but some kids may be able to. I involved her with following the instructions and putting the right pieces together.

She is pretty happy with the final product! I think its really cute. The stand is already full of her jewelry. I honestly don’t know how it is still standing. LOL.