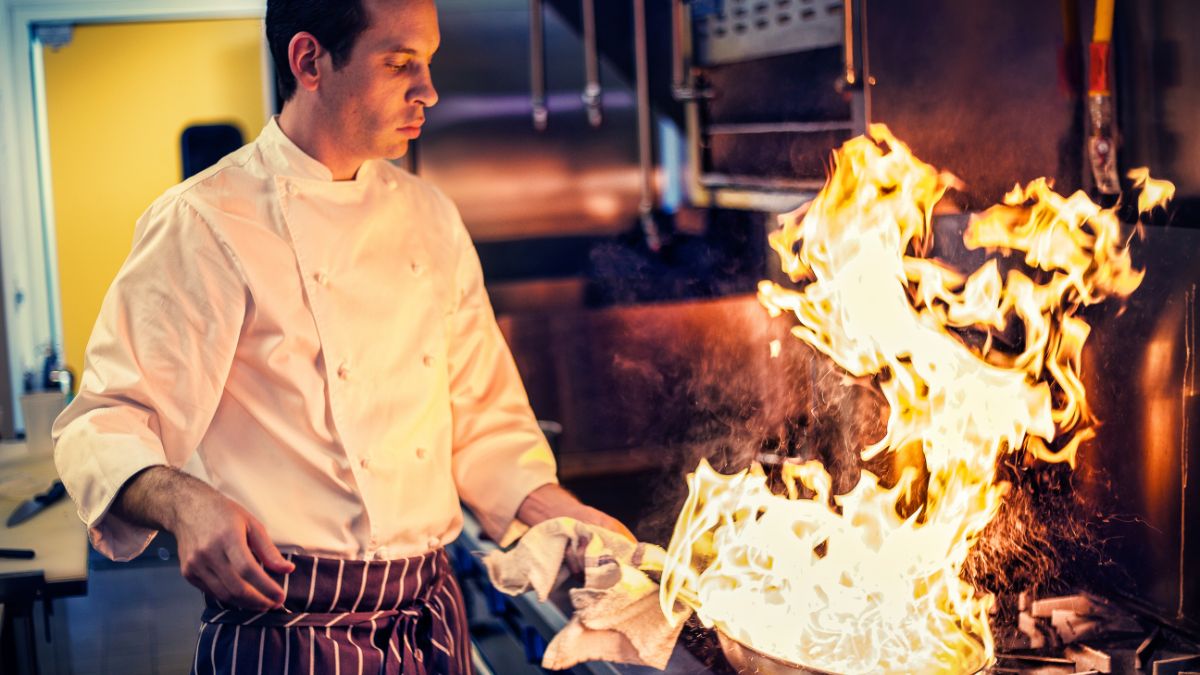 Some celebrities like to remain under the radar and undisturbed if they are enjoying a meal out in a restaurant and some go out of their way to engage with the staff. The following are real experiences people had preparing meals for celebrities who came to the establishment where they worked in the kitchen.

“He ordered a Lobster Roll and said it was the best he ever had. Either he was lying and being nice or never had many because the place I worked at at the time had mediocre lobster rolls.”

“Made pasta for Emma Watson she loved it and came back next day for brunch but we don’t serve pastas for brunch so she left.”

“My restaurant cooked for Andre 3000 and Mos Def (same party). They loved it. Andre stayed after we closed and played the flute for and took pictures with our staff. It was awesome. We had other famous people come in but those two were probably the most recognizable names.

Andre 3000 was a regular when I worked at a restaurant in the ATL airport. Incredibly kind and humble especially to BOH (back-of-house staff)

“This is 20 years ago but my buddy ran a kitchen in Yorkville in Toronto. He asked me to help him on a random Tuesday night so said sure why not.

Turns out someone called in and booked the entire restaurant to themselves we had no idea who it was but they paid handsomely.

Low and behold musical legend Prince walks through the door. At the time his wife was from Toronto so they had a house here. He sat by himself for two hours and enjoyed his meal in peace. Came to the kitchen after and seeing him in person he was a very dainty small man, very feminine. And then said “Thank you very much” in the deepest voice I’ve ever heard. Took us both off guard.”

“Quiet and sweet. I swear Keith Urban’s tail starts wagging if you ask him if he’d like any grated parmesan over his pasta.”

“Just rude, and dismissive. And puts ice in his Pinot Grigio.”

“The WORST. Came in on Valentines. No rez (reservation). 9pm. With wife and newborn baby. Refuses to eat the prefix. Is vegan.”

“I had the pleasure of making poke for Alison Brie. She was truly lovely to interact with. Completely kind and was happy to get a photo with me so my wife would believe it actually happened!

Me too! Honestly, I was a little flabbergasted. She came up to the counter and ordered for herself. For a moment, I thought she was a doppelgänger. I asked for a name for the order, she said “Alison.” She was significantly more polite than the majority of my customers!”

“Cooked a 32 oz Porterhouse rare for The Undertaker once. I saw him walk in from 20 feet away and I was still looking up at him, monster of a dude but a sweetheart from what servers told me.

“My dad once catered for Arnold Schwarzenegger and the dude wanted meatloaf but he wanted it all in individual pieces that, were shaped like California. My dad had to buy a California shaped cookie cutter and cut out probably dozens (i don’t remember the exact amount) of little California shaped meatloafs.”

“I worked at a small restaurant that held made 40 people total. We did dinner and brunch, with our last shift of the week being Sunday brunch. We got a call Sunday morning asking if we would be able to host a dinner for a special guest.

Normally my boss would say hell no. But Jim Gaffigan just happened to be in town doing a show. After confirming it wasn’t a rival restaurant calling in to mess with us, we geared up for 20 of him and his crew.

Such a chill, down to earth dude. Got pictures with him and shot the s*t for a minute. His crew were great too. Definitely worth staying open that night.”

“Gordon Ramsay came into a restaurant I used to work in while filming that Nat Geo show, Uncharted. Just about crapped my pants – it was swamped already and it was my Garde’s (Garde Manger) first day (and her first day at a full scale restaurant). We were out of a bunch of stuff (oops) but he said he the meal was “lovely.”

“I’m a short order cook at a very small diner. The kitchen is open and the register is in the same little area. All I could think about as he ordered his food was that I was about to cook for Lord Farquaad.

Yeah he was very nice! Made some jokes, asked us our names, and good tip!”

“I got to feed drake one night, a day before a concert of his. He wasn’t expecting food but the owner asked me to come in and do something nice for him. He brought his dishes back to the kitchen, asked me where to put them, and thanked me.”

“Cooked a cheeseburger for Adam Sandler. He had his own special bun (I wanna say it was gluten free or low carb or something, looked and felt like a dense English muffin kinda thing from what I can remember. It was in a ziplock bag, no brand name or anything, potentially homemade) that came back to the kitchen from his manager I think. Cool dude, got to meet him after.

“Ray, pretty is lit, came in the kitchen after his dinner to mooch a cigarette while already having one behind his ear. When l pointed it out, he said that one was for later. Legend.

His whole table was super chill. No modifiers, ordered and ate everything, had several bottles of wine and a fat tip to FOH (front-of-house workers). Great guests.”

“When I worked in Aspen at a mountain top restaurant Kevin Hart came in with his family 30 minutes after we closed (I know this happens in the industry but this place was mountain top so the staff had to take a lift up and down, we always hard closed at 4 so we could shut down and the loft operators could take us off the mountain)

Orders a ton of food, barely touched any of it, and doesn’t tip the staff.”

“Yoyo Ma is exactly how you expect him to be. Our restaurant was across the street from the concert hall he performed at so of course that night we were incredibly busy. I told the cooks and servers to leave him be until he had finished his meal. I went out to greet him and apologize for the wait and he was just very very humble and human about the whole thing. I didn’t ask for a picture because I didn’t want to fanboy over him. The server and one of the cooks asked for one and said he was very nice and patient about the whole thing.”

“Completely torched a burger for Sid Crosby. It was in the middle of his concussion injuries and I had an anxious moment where I though I might give him food poisoning too and get murdered by my friend group. He was a gem and didn’t send it back.”

“I cooked for Anthony Bourdain during the “No Reservations” show and speaking tour era, in 2010. Instead of taking it to his dressing room, he instead sat in the kitchen and ate a meal with me for about 45 minutes and we talked. A lot. Later, during the intermission of the show he was doing, we shared some of my Jameson and talked for another half an hour. Everything you thought you knew about him from the shows you watched and the books he wrote is 100% accurate. He was that guy. I never watched another one of his shows after that experience because I knew what I had to know about him.

I just wanted all of you who loved him like I did to know that. What you saw was what he was.”

“I cooked for Kurt when he was filming Death Proof. Definitely the nicest celebrity I’ve ever dealt with.”

“I served Khloe Kardashian and she was one the rudest people I’ve ever encountered. Got drunk as hell, yelling at the server staff about “don’t you people know who I am!” “Can’t even make a drink right!”

“The main actress from Seinfeld was most notable. She came to the kitchen and thanked everyone for their meals and shook the hand of the female chef which my chef loved.”

“Jim from the office is another one who was really human with the staff as well. He took a bunch of pictures with servers and they were gushing about how great he was.”

“We were doing an event for a food fest and he rolled up to our booth. He couldn’t have been nicer, was even cool enough to sign my apron. Mind blowing for a 23 year old.”

“My favorite was Susan Sarandon. Totally low key and normal customer. I don’t think any of the servers recognized her. I was at the register, she came up to pay and said everything was terrific. I only knew it was her because she has a fairly distinctive voice and face. I pretended like I didn’t notice who she was. She tipped 100%. 10 out of 10.”

“Colin Powell sent his compliments back for my triple sec chocolate creme brulee. Apparently he was a kind and gracious guest as well.”

“I cooked for Forest Whitaker and he left a 200 tip on an hundred dollar tab.”

Celine is an excellent human being. She really really is.”

“I cooked for Jason Momoa. Dude loves salmon, spinach, and chicken wings. He’s a little haywire, high energy, but easygoing and generally was simple to cook for.”

“He was super nice. For some reason, that night I took my dinner out to the dining room after service was over, and most of the place had cleared out. As he was leaving, he thanked us, saw I was eating my dinner and said “Bon appetit” with a big smile. “

“He checked into the hotel late at night. Our restaurant was closed. I wasn’t even a cook — I worked banquet setup and room service and I was the only one there. When I told him the restaurant was closed he looked so sad about it that I told him I’d see what I could do. I knew where everything was in the walk in so I made him some bowtie alfredo primavera with pan-seared chicken and he tipped me $20 on top of the $17 bill.”

The Rock and Jeremy Stratham

“They had their launch party at my restaurant after their premier showing for Hobbs and Shaw. The Rock left the party through the back, and made sure to thank the BoH staff. He was very sincere. Very nice dude. I always knew he was big but seeing him a foot from me made me feel like a tiny little bug.”