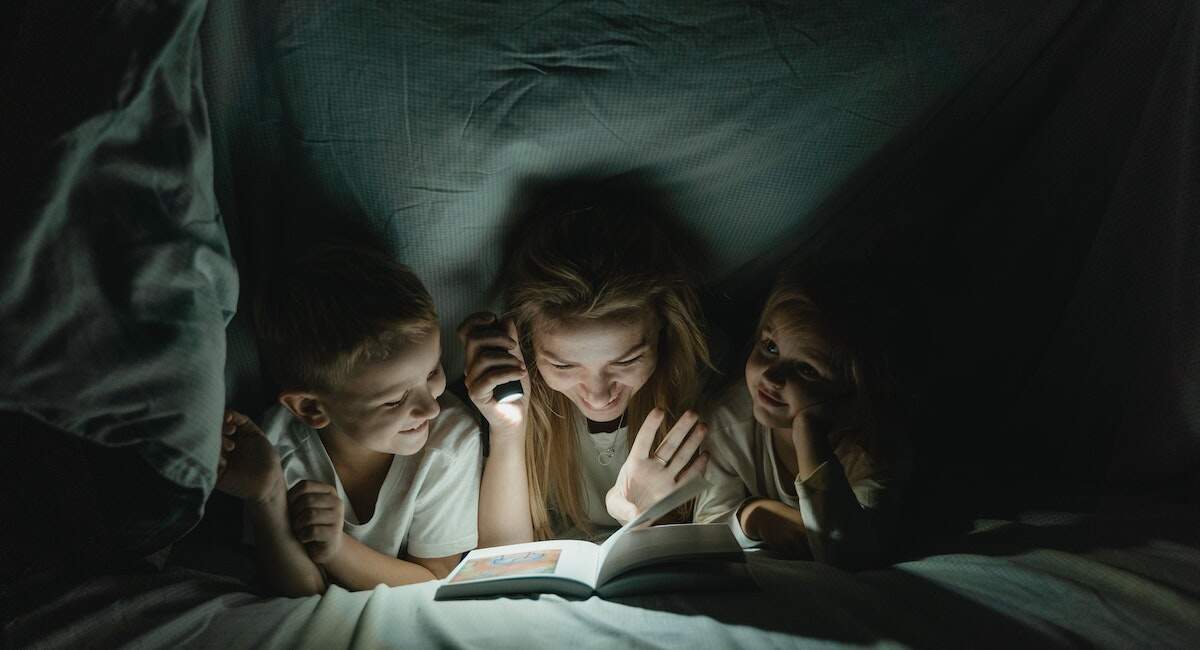 Reading scary stories for kids aloud can be great for a Halloween story or any time of the year! It’s fun to watch kids getting wrapped up in the suspense of an eerie story with all the twists and turns thrilling tales have to offer.

The following is a list of scary stories to tell kids that everyone in the family can listen to and enjoy. Grab your hot cocoa and sit around a campfire or inside with blankets. Dim the lights to get the full frightening effect of sharing creepy stories.

The Best Scary Stories For Kids

Clap clap is a Paranormal story about a husband and wife who went hiking in the mountains and realized they were lost after a few hours. As the sun set, the couple desperately searched for somewhere to spend the night.

They eventually saw a dim light through the trees and an old cabin as they reached a clearing. The couple entered the house, but all was quiet. Though they stayed there to sleep, they stayed awake at night after discovering that they were not alone.

Bloody Finger (also called The Ghost With the Bloody Finger) is about a hotel room on the 13th floor that people believe is haunted. Some brave customers think it’s just a myth or nonsense until they spend the night!

Bloody Fingers is one of those creepy ghost stories with some humor that kids will love.

An old woman dug up vegetables in her garden to use for dinner. As she dug, she discovered a hairy toe. The old lady thought she could make a delicious stew with the hairy toe, so she took it to the kitchen and used it with other ingredients.

Find out what happened when the owner of the hairy toe came back, angered his toe was turned into a meal. It’s one of the best scary stories for kids.

They got married when they grew up. Eventually, in their old age, the man who married Jane knows it’s his last chance to find out why Jane wears the yellow ribbon around her neck daily.

A young woman received a beautiful emerald ring from her fiance, a very loving and generous man. Unfortunately, the woman became ill close to the wedding and passed away.

The clergyman who performed the funeral couldn’t stand that the beautiful ring would be buried with the young woman. He attempted to take the emerald ring off her finger, and something surprising happened!

A woman inherited an old house from her aunt, who passed away. When she started moving into the home, the neighbors keep warning her that it was a haunted house.

On her first night in the house, lying in bed, she repeatedly heard the sound “rap, rap, rap.” Read what she discovered after she investigated.

A warning to readers: this tale is gruesome!

A police officer was at the house of an old woman whose hobby appeared to be beheading visitors because she enjoyed the company. Moments after an officer’s arrest, the old woman sat down to explain why she committed this gory crime and how she did it.

A couple traveled home from a trip in their horse and carriage. Along the way, their light failed, and it became too dark to continue traveling. Fortunately, they came across a house.

The couple knocked on the door and was welcomed by an older husband and wife. The couple spent the night and wanted to thank them for their hospitality by leaving a fifty-cent piece on the kitchen table. But when they share their story at a local restaurant, they discover something disturbing.

Dem Bones is the story of the famous pirate Captain Kidd and his crew, who buried their stolen treasure off the coast. Onlookers watched them bury it from afar, but nobody could find it again.

Now appearing as skeletons, the pirate crew periodically returns from the sea to celebrate the buried treasure but disappears again before dawn.

A woman is warned not to visit a magic castle at midnight. Her curiosity gets the best of her, and she enters the castle anyway.

Each step of the way, she found creepy messages written in green slime, warning her not to continue. But she carried on past each one, traveling upstairs, and found something very freaky! It’s a classic and easily makes our list of scary stories for kids.

If this story sounds familiar, it’s an urban legend you may have seen in The Pirates of the Caribbean.

The Flying Dutchman is a legend about a cursed ship doomed to travel around South Africa for eternity. This legend started in the 1600s when a Dutch ship sank off the coast of Cape of Good Hope after the infamous captain, Van der Deceken, failed to see a fierce storm looming ahead.

As the boat is sinking, the captain yells out a curse that affects anyone who sees the ship appear.

A young man named Jose bet with another boy that he could stay out all night without fear. In the middle of the night, Jose noticed a slender man standing alone. Jose approached him and discovered the man was looking for another town.

Jose offered to take him there, but as they started walking, he noticed that the man’s hands were turning into blue flames. The story takes a chilling, unsettling twist. It doesn’t end well for Jose!

For most, a ball pit is fun to jump around and be carefree. However, this story might haunt you and change how you feel about ball pits!

A young boy went to a restaurant, had dinner, then made his way to the ball pit for some fun, only to get the surprise of his life.

You’ll find a couple of versions of Cow’s Head online, but one is a more kid-friendly ghost story.

Like the story of Cinderella, a daughter named Oksana was mistreated by her stepmother, who favored her child more. When the family ran out of money, the father sent Oksana into the woods to fend for herself.

One night a figure with a cow’s head came to her cabin and asked to sleep over. Life took a big turn for Oksana after his visit.

The White Cap is a nightmare of a ghost story about a little girl who was constantly the target of her brother’s pranks to try to scare her.

One day when she was told to put the laundry on the clothesline, she saw a figure dressed in white sitting on the steps. Thinking it was her brother trying to prank her again, the girl grabbed the white sheet from over its head and ran away.

Later she found out that it wasn’t a joke and she had to return the white cap to its freaky owner, who was a ghost.

There was a man who was such a great guitar player that people would pay to come and see him play. One night while leaving a party, a stranger came out of the bushes. He complimented the guitar player on his performance. Something creepy was revealed when the stranger asked if he could play the guitar!

The Dancing Dead is an Irish tale about a young girl named Kathleen, who was on her way home one night in November. When she sat down to take a rest, a boy approached her. She recognized him as the ghost of the boy who drowned the year prior.

Let’s just say some people in Ireland who believe in folktales were afraid to leave their homes any night in November after hearing the rest of this story!

This story is about a girl named Mary whose father wanted her to repeatedly prove her bravery to his friends by completing scary tasks at night. Mary took on the challenge every time.

One dare she accepted was terrifying to some and resulted in a terrible outcome.

The Golden Hand is a story about greed. A man married a woman solely because of his interest in her golden hand.

He slowly poisoned his wife, and she eventually died. He took the golden hand before she was buried in her grave, but he didn’t realize he would pay the price for a lifetime.

The Coffin is about a man who walked home alone at night and passed through a cemetery.

As he went by the graveyard’s gates, he heard a sound: BUMP, BUMP, BUMP. When he turned around to see what it was, he saw a coffin coming down the road behind him. Find out what happened as the chase continued.

Enjoy these scary stories for kids that are also a little silly and make great campfire stories. Whether it’s a Halloween night or a family night at home, spooky stories for kids are always fun and entertaining for everyone. Maybe avoid telling these creepy stories at bedtime, though!